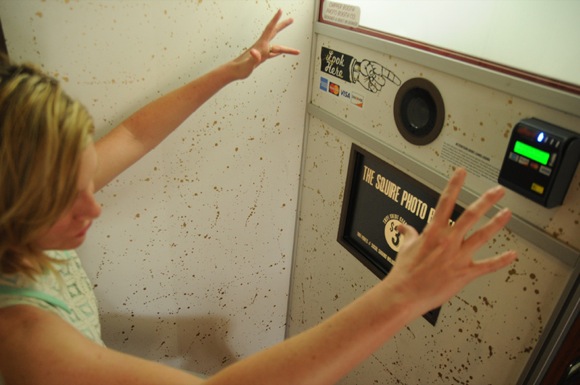 Special thanks to Social Booth customer, Vince for writing this guest post on how to accept credit cards with Social Booth in a retail photo booth environment.

How to accept credit cards with Social Booth

This is not intended to be the definitive way to do this, nor is it the cheapest. It also isn’t a complete guide to building a retail photo booth. This is the explanation of how our tiny company successfully accepts credit card payments at an unattended photo booth.

Some background: We have a ton of experience in building photo booths for our rental company, limited understanding of vending machines, and zero experience working with credit card processors or hardware. Our goal was simply to build a photo booth that accepts credit cards as fast as possible. Keeping that in mind, here is our method on accepting credit card payments at a freestanding, unattended photo booth:

Key Item #1: Software. We chose Photo Booth Solutions’ Social Booth because after a couple emails with Mike, the owner, we felt we would have good support. We also knew that SB’s social sharing options are attractive to venue owners who want to get the word out about their business. Mike also programmed a special “time left” countdown timer that you’ll see within the software (which is now standard), and programmed in a “wait for a keypress before starting photo booth sequence” for us as well. (Why these customizations are important coming up).

Key Item #2: Credit card processor and hardware. This was the single most frustrating part of the process. We called several banks and processing companies. Nobody knew how to how to setup a vending machine merchant system because the whole credit processing industry is focused on Internet sales or sales from a smart device. They all wanted us to charge using the smartphone swipers or use an Internet gateway thru Internet Explorer and all had major security concerns. Nobody was helpful for a vending start-up.

Enter USA Technologies. They have a full service suite designed just for vending. At it’s core is a device called the ePort. If you’ve ever bought a $4 bottle of Coke from a Las Vegas vending machine then chances are you swiped your credit card using an ePort. After a 20 minute sales call, and credit application, we immediately purchased an ePort, wiring dongle, antenna and power supply a grand total of over $500.  Update: We used a “Non-traditional ePort” that runs $500 and has to be purchased by calling USA Tech. Their standard ePorts can be found elsewhere on the Internet for around $249, however these may not interface with a PC setup as easily.

The ePort processes a credit card charge and then sends confirmation of that successful charge as an electrical pulse through two wires– much like a coin mech on an arcade machine.

Key Item #3: Middleman hardware between ePort and PC running Social Booth. A device is needed to receive the ePort’s pulse and then translate it into meaningful info. We purchased an Uhid Nano to be our translator. The Uhid connects to your PC via USB and can be programmed, through a GUI, to accept a pulse and translate it into a keypress. Uhids are not cheap and come from the UK, so shipping is expensive. There are other programmable chips in the USA (Arduino, Teensy, etc) that are more economical, but their GUI is not as simple to work with as the Uhid.

Stated in a few steps:

That’s it. The experience is this: After swiping a credit card, the ePort takes 2 seconds to charge the card, then sends a pulse to the Uhid, which translates that into an “a” keypress to Social Booth (which is sitting idle in full screen mode). Social Booth immediately kicks off the photo booth countdown. The touchscreen shows all the action but disallows any user input until the “Choose Filter” screen. After that, all Social Booth and touchscreen features work perfect … Facebook sharing, Twitter sharing, etc. After the photo booth sequence was completed, Social Booth returns to the “Ready” screen and waits for another credit card to charge.

That is essentially the credit card process in a nutshell. Other things to note: